Well either way, I was surprised when Midnight, the badger that helped the Clans when twolegs started taking over their territory, got WindClan to help ThunderClan fight off the rest of the badgers. Midnight reminds me of Zecora. Except she doesn't speak in rhyme. It really made me aggravated how they quarreled throughout the book. Last one in series 2!

But, I'm wondering, since so much time passed from the ending of series 1 to the beginning of series 2, how much time will pass at the end of series 2, or is there going to be any time pass? I don't know. But anyway, this is a great book, once you get past the repetitive quarreling. View 2 comments. Dec 22, Robyn rated it it was amazing Shelves: fantasy. This book was a really great book! It was about Brambleclaw and Squirrlflight getting into quarrels about Brambleclaw and Hawkfrost hanging out with each other.

Hawkfrost is Brambleclaw's half brother and she doesn't trust him because Tigerstar was his father. On the other hand Leafpool is tring to choose over her clan and her true love. Leafpool is a medicen cat and they're not allowed to fall in love. 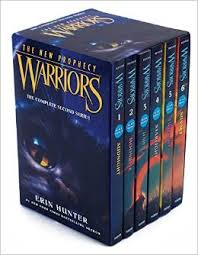 Jan 30, Devastate Lasting rated it really liked it Shelves: challenge Stormfur and Brook came back! May 11, Lydia Dyslin rated it it was amazing Shelves: adventure , reads. Powerfully emotional and heartbreaking Feb 01, Naomi Willard rated it it was amazing. Warriors-Twilight, is my favorite book ever written! Her sister, Leafpool, a medicine cat, is in love with Crowfeather, a Windclan warrior.

Thunderclan is beginning to recover from their long journey, and Sorreltail will be the first queen to use the new nursery! As I said before, Tw Warriors-Twilight, is my favorite book ever written! As I said before, Twilight is my favorite book. I remember savoring every page of it I read and taking longer than usual to read it. Otherwise, this book is fabulous!! I like all of the characters, I just find Squirrelflight the most entertaining out of all of them.

The theme of this book is to follow your heart. Spottedleaf told Leafpool to follow her heart and make the decision she wanted about Crowfeather. When Leafpool returns to Thunderclan to save her clanmates, who are in danger Crowfeather tells her that he knew she loved him, but not enough to give everything up for him. This book was sad, yet amazing. Despite the lack of action, I enjoyed this one a lot more than the fourth book! There was a lot of focus on character development, and I really felt for the struggles that all the cats were going through.

Leafpaw most of all. Her feelings of abandonment from her Clan - feeling replaced by Brightheart, conflict with her sister, and guilt over loving Crowfeather - were completely relatable. She felt unwanted, like all her friends and family had turned their backs on her. The fact that she felt like they didn't want her anymore, even though they truly did want and need her was so heartbreaking. I was hoping their issues would be resolved soon, but the chasm only grew : I'm hoping it's resolved in the final book of the series! I also don't like where Brambleclaw's character is going - he was such a strong, honorable cat in the beginning of the series; to see him succumbing to ambition like his father is so hard.

I hope he sees sense soon as well! Her death was almost as rough as Bluestar's and Yellowfang's! I was legit sobbing, I can't deal man. I CAN'T. My heart is broken.

A cunning plot is in motion where the spirit of Tigerstar is influencing his sons, Brambleclaw and Hawkfrost for the bad. Brambleclaw is more than a little credulous. The Erins do keep reiterating the obvious at times. Can be annoying.

A story thread continues that compares faith to lack of faith and, in one instance, blind faith on the part of Firestar that lasts the rest of this series. My main complaint at this point is that the books end in a way that doesn't properly seem 'finished', espe A cunning plot is in motion where the spirit of Tigerstar is influencing his sons, Brambleclaw and Hawkfrost for the bad.

My main complaint at this point is that the books end in a way that doesn't properly seem 'finished', especially the inevitable 6th installment. I've now read all six of this series so that's my conclusion. Apr 09, Joey Scheeren rated it really liked it. This book is full of suspense it is when the clans have settled into their new home but not easily. Will there be more trouble?

It was filled with plot twists, adventure, and mystery. I loved this book and was had so much fun reading it and I can't wait to read the next one. If you like adventure, and mystery you would love this book! Jul 27, Aurora Dimitre added it Shelves: everyone-will-die , july , teared-up-a-little , childhood-revisited.

Aug 05, Lydia rated it it was amazing. Squirrelflight is still angry with Brambleclaw. Leafpool has trouble between choosing clan loyalty and loving Crowfeather. I can't remember if they chase off a mother badger in this book or the last. During a gathering he says that ThunderClan is trying to prove that they are stronger or something like that. Leafpool decides to start visiting Crowfeather at the border between their clans. I am sick of these forbidden love stories. I know they love each other but still. Also Tigerclaw is visiting Hawkfrost and Brambleclaw in their dreams.

He's telling them how to become leaders and somehow Leafpool visits their dream.

Leafpool starts getting scared after one trip to the moonpool after she has a troubling dream and thinks that StarClan is abandoning her because she is breaking her code. Also the stupid Twolegs leaves some chemicals in RiverClan, and two cats die while many others get sick. Leafpool helps Mothwing with her problem. Back to Squirrelflight, she seems to miss her friendship with Brambleclaw even though she denies she cares for him.

Also the kittypet living in the barn named Daisy, moves into ThunderClan to protect her kits. Also Sorreltail is pregnant with Brackenfur's kits. One of my favorite cat is going to be a daddy!!! Squirrelflight hears Tawnypelt screaming one day and sees one of the aggressive kittypets attacking her. ThunderClan and ShadowClan attack them warning them to never hurt the warriors again.

So Crowfeather asks Leafpool to leave the clans to be with him as a loner. Cinderpelt was spying and tells her no.


They fight and Leafpool runs to the Moonpool. Spottedleaf tells her to follow her heart.